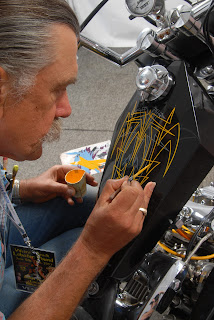 Clearly the finishing touch for any carefully thought out vehicular project is the subtle painted filigrees and thin stripes that commands the eye as the beholder begins to really look. Have you ever wondered where those fanciful designs originated? Vehicular décor began with the chariots of the affluent, thousands of years ago, with gold leaf scrolls and thin accent stripes that implied quality and would persuade appreciation from the viewer. The circus in the 1800’s had extensive hand carved and gilded scrolls on their wagons, again to impress the viewer and establish the investment made in the caliber of the show.

This decorative art genre accompanied mankind and developed through the ages as quality carriage decoration and wagon striping became the benchmarks of carefully engineered and accurately constructed vehicles. Precise stripes could only flow over wooden joints that were tight and carefully crafted wrought iron components were complimented with accent designs. Great pride was attached to the decoration that was part of the process of these proud craftsmen. In a recently unearthed letter to a customer, responding to an attempt to order an undecorated Studebaker wagon, the refusal comes from the manufacturer, “If you want wagons without stripes, you don’t want a Studebaker”.

Fire engines have perhaps the most famous reputation for elaborate decorations. Originally “fire companies” were independent, private affairs in competition with one another. The premise was simple. Elaborate decorations associated with a particular fire company implied that their fire fighting equipment was superior. Artisans with a background of floral specialties, dimensional and intricate geometric scrollwork, elaborate letter styles, and Celtic designs flourished during this era. The hey day of gold leaf scrollwork, and finessful pinstripes peaked prior to the fire companies becoming municipal affairs.

The carriage stripes followed the manufacturing evolution into the horseless era and their accent stripes were included as a finishing touch on many early automobiles that completed for a share of the market. When car design exploded after World War II, so did the personal expression that boomers found in building from a plethora of car parts and decorating in the emerging style, what became known as hot rods. Iconic artists created ratfink monsters; hiding faces in fanciful pinline designs and the flame became the preferred artistic statement to suggest power, speed, testosterone and thrills. 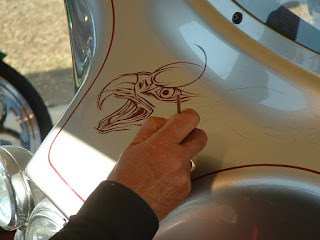 Email ThisBlogThis!Share to TwitterShare to FacebookShare to Pinterest
Home

Dave (Letterfly.com) Knoderer
The career path of Dave “Letterfly” Knoderer has been as diverse as the many creative offerings produced during four decades to an ever increasing list of satisfied clients. Starting as an apprentice to the sign and design trade as a teenager, his appetite for the unusual and challenging led him to many sensational projects. A skilled painter, he designed large wall graphics and theater sets, themed interior and exterior murals in amusement parks and restaurants, crafted delicate Gold Leaf window treatments, and gilded ornamentation on Antique Fire Engines. When the computer took over the sign game, he established himself in the RV industry as the most prolific airbrush mural artist in the country, producing over two thousand high quality painted works on the exteriors of motor homes that lead to other even more spectacular projects including the decoration of retail environments, residential murals and delicate vehicular and motorcycle pinstriping, portraits, imagery and custom paint of all kinds.